I’m pretty sure it all started from the two left shoe debacle and I had to use these fancy minimal shoes. But my left shin has not been the same since. I don’t believe it is from over training and/or burnout. I think it is from using improper shoes for the wrong amount of mileage. The night after the shoe incident I was sitting on the couch with my husband, aka Joy Killer watching Peep Show and I realized that I had donated the two right shoes to Goodwill.

Fu@k!
I called. They are gone.
So I have been alternating between super minimal shoes and my old Asics that are like cinderblocks on my feet.
Really this is a great reason for an excuse. Right?!
Well it is a good reason for an excuse if your the type of person that likes to look for excuses. But I’ve been more pissed and depressed. Super freaked of getting injured; I should be. My time is coming I’m sure of it. I went to spin instead of running a few days and that helped. My proper shoes came via Fed Ex last night (because we live in BFE I can’t just goto my local running store) so today I did a kick ass 7 mile tempo run and hit my time dead on. Now I ice and pop Aleve like its hydro-codone. Haha. I joke.
Do you err on the side of caution with potential injuries or do you press on? Any one else get frustrated with where they live? Hydro-codone or Aleve? 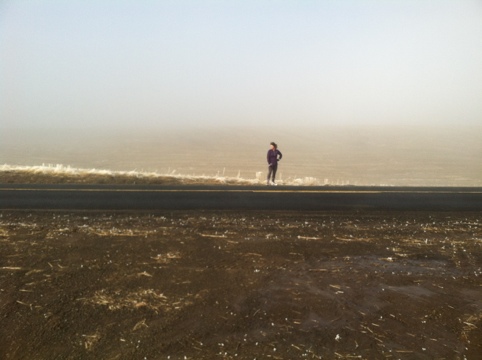 One thought on “Stupid Shin”