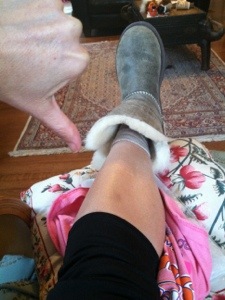 Totally sucks. Even thought this is taper time I was stoaked to be in such good shape because this was the week I was going to put the hammer down as far as speed work and tempos were concerned. Not. So. Much.

I was able to get into the acupuncturist on Tuesday morning and Holy God!! It never hurt so much. My calf is/was so tight it has been causing my shin pain. At least that’s the current diagnosis. I probably didn’t obey the 10% rule all the way but I pretty dang close. So I think maybe I did a little much but also 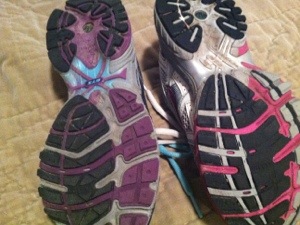 shoe on the right is my old shoe

I came to the brilliant realization my shoes are from early July. I don’t know maybe 600 miles on them? I could figure it out but I’m to lazy and it doesn’t really matter. I know one is supposed to rotate shoes but then I lose track of how many miles are on them; because as shown I’m sooooo detail oriented about that. Sigh.

What’s the plan?? I have no idea!!
Help! I’ve kicked the crap out of the elliptical and pedaled my little heart out on the bike but decided not to run till it felt better. The research I’ve googled (I would show the link but I’m a lazy iPhone blogger) says one does not lose ANY fitness until 7-10 days if doing absolutely nothing. So I figure to play it safe but I do want to scratch my eyes out and steamroll every jogger with my car.