Two weekends after PDX marathon, myself and some gal pals decided to do a half marathon in Umatilla. It was completely a last minute idea, and a brilliant one! Umatilla is one the least appealing places in the U.S.A. but the temptation to sorta- kinda redeem myself from PDX was too overwhelming to pass up.
The run was hillier than I expected. Being in the bleak desert I was thinking the course would be mostly flat and the only obstacle would be blowing tumbleweeds. It wasn’t the hills that bothered me so much but just when I kinda felt in “the zone” with my pace, there was either a climb or a descent. 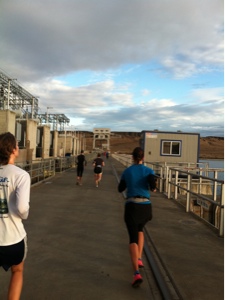 I finished in 1:53, not bad. I came in 3rd woman for my age group. There were probably only 20 other women. For you smart asses out there I know that’s what your thinking. Joy killer.
Brooke and Niki both kicked ass! Brooke took second woman overall in the half and Niki was 3rd woman overall in 10k. Way to hustle girls! I also caught a quick glimspe of this gal. I thought she looked familiar but just figured it was from the sandwich shop, but knew that wasn’t quiet right. It was about mile 7 I figured why she looked familiar. Small world.

There were only about 200 participants and even fewer spectators but it was really nice not to fight through the sea of people like in PDX. It also didn’t help that in Portland I was in the 4:30 corral (when I registered in spring that was a guess finish time). Trying to weave in and out if people just seemed silly and too much effort. All the races I’ve done, with exception of PDX have been on a smaller scale. Gotta say I like the ease of small crowds. I don’t have a whole lot of patience, especially when I’m amped up about an event. I’m starting to wonder if I tend to prefer no nonsense things in general. Seeing a pattern. My darling husband also doesn’t seem to do well with crowds these days either. I only saw him and the kids once at Portland. And I never did see the ten other friends that came out cheer. Bummer.
After crossing the finish line in PDX and making way to my family I could tell they were all tired and cranky. Ok, just my husband was but that’s enough to sink the entire ship. So I (we) decided that they probably won’t accompany me on any more races if they are large. It’s just too much work and really sort of silly. I’m thinking most races will be smaller ones for this girl.
I wonder if most people prefer smaller or larger races. Why?